The inaugural Class of 2015 Hall of Fame inductees: 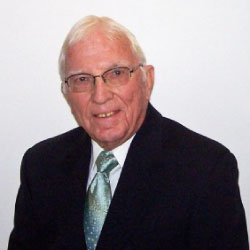 Larry Peahl graduated from Taft College in 1955 as a pre-engineering major. In 1955, he had served as ASB President and was also the class valedictorian. Several years later, Larry returned to Taft after having received his BA in Math from UC Berkeley. He began to teach full-time courses which included courses in Calculus, trigonometry, algebra, general arithmetic, physics, Civil Engineering, and computer programming.But Larry wasn’t only a teacher. He was also an Academic Advisor for four years, the football team’s statistician, the public address announcer, and coached track. In 1977, Larry took over as CFO, serving in the position for 18 years before he retired in 1996.

However, even after Larry retired, his passion for teaching and Taft College continued as he kept teaching Calculus and began serving on the Taft College Foundation Board—a position he continues to this day. 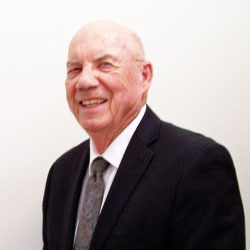 Don Zumbro graduated from Taft College in 1954, and excelled academically and athletically. During his time as a Taft College student, Don participated in basketball, football, and golf, and then transferred to University of the Pacific to continue his academic and athletic career in basketball. After returning to Taft, Don began his teaching career at Roosevelt School in 1956. In 1962, Don moved to Lincoln Junior High where he taught physical education, and coached basketball. Don led his team to the county championship, clutching the victory twice during his time at Lincoln. Don then became the principal of Lincoln in 1967, and held this position for 10 years.

Don’s next educational leadership role of 20 years was at Taft College serving as the Dean of Student Services. Don oversaw various departments and programs, and played an instrumental role in reinstating the athletic program after it was suspended in 1994. Don’s leadership style set the tone for Taft College’s outstanding history of friendly, professional, and personable customer service within Student Services. Don’s style encompassed compassion, fairness, toughness, and high expectations for both students and employees alike, and his integrity never wavered.

Now retired, Don continues his contributions to Taft College and provides service to the community as a representative of Taft College. Don is currently the Vice President of the Taft College Foundation Board and has been a member of the Rotary Club of Taft for 35 years. 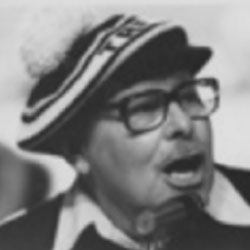 Jack McCall “Cougar Jack” was the way students lovingly referred to Jack McCall during his four years working as a residence hall aide at Taft College. But Jack was always more than just a residence hall aide. He was a nurse, a counselor, and a friend to the students under his charge.Jack later reflected that his part-time job at Taft College was the best he ever had—even though they fired him in 1982 when he turned 70 years old. Despite this unfortunate end to a wonderful number of years, Jack reflected on his time at Taft College fondly—remembering the football practices he never missed, his role as an honorary cheerleader for the team and the time he helped cheer on the football team during one of Taft College’s wins at the Potato Bowl. There was even that one time when the Homecoming Queen asked Jack to be her escort.

Through all of his contributions at Taft College (and even before his time in Taft, when he served in World War II) Jack continued to display a spirit that was not only comforting to the students he interacted with, but inspiring for anyone who knew him. 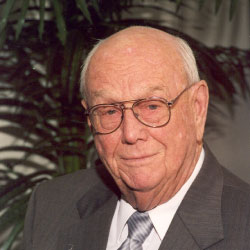 Born in San Francisco on August 13, 1921, John Miller’s childhood was full of many interests, activities, and learning experiences that molded him into the man he would later become. John began to attend Taft College, but left when offered a job in Long Beach at the Douglas Aircraft. In 1943, he enlisted in the Air Corps to serve our country during WWII.

Following his service, John and his wife Betty returned to Taft where they operated as grocers for the Ideal Market. Through this market, John marked himself as an instrumental member of the community when he provided food services to Taft College (which previously had no food service in place) and also provided groceries to families who were just getting their start in Taft and would be unable to thrive without his help.

For 30 years, John served on the West Kern Community College District Board, where he performed as a monumental leader, making hard decisions, but also implementing influential programs like the TIL (Transition to Independent Living) Program and the Dental Hygiene Program—that continue to receive regard and acclaim to this day. 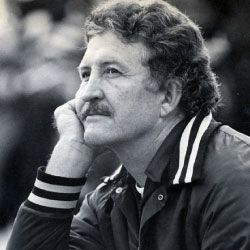 This six time California State Coach of the Year began his life with an inauspicious start. Twelve years after his birth to Olin and Anabelle Baldock in Holly, Texas, young Al hitchhiked to California with his mother and younger sister following the divorce of his parents. Years later, Al went on to play 3 seasons at USC, where he received All American honors and later went on to coach the USC freshmen team while receiving his teaching credentials. This marked the start to an incredible career leading Al from school to school where he did what he did best—turn ordinary football teams into great ones.

Al’s career took him to a number of schools in Santa Maria, Visalia, Los Angeles, San Diego, and of course, Taft. The strides made and victories won during his 18 seasons coaching at Taft College left behind a legacy that will last for years to come. Al’s time with Taft College witnessed 15 conference championships, 5 Potato Bowl Titles, 3 State Titles, and 2 Junior College Grid-Wire national crowns.

On September 14, 2009, Alvin Baldock passed away, leaving his wife, daughter, two grandsons, and a legacy that Taft College will never forget. 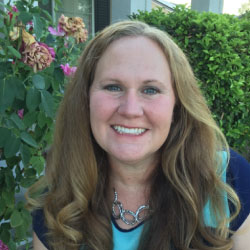 Born in Bakersfield, California in 1977, Amanda Smith’s passion for volleyball was evident even in her youth where she played six years in the Kern River Volleyball Club, also attended the Annual Nike Volleyball Tournament for six straight years. When Amanda went on to play for Bakersfield College, she was unsure of whether or not she would continue her volleyball career. However, with the arrival and influence of Coach Kanoe Bandy from Taft College, Amanda started what would soon be an incredible record.

After being recognized as the 1995 Western State Conference MVP, Jockey Club Athlete of the Month, and becoming a member of the All-Southern California team, Amanda followed Coach Bandy to Taft College where she played on the team that won the Central Valley Conference title with a record as an unbeaten team. Once again, Amanda was selected as an MVP and was awarded the San Jose All-Tournament MVP, CVC Academic All-State Team, All-Northern California team and received a student-athlete scholarship to University of Alabama Huntsville.

Amanda’s incredible achievements didn’t stop there. She received her degree in psychology and returned to Bakersfield to continue her education, making strides in education in our community that continue to this day. 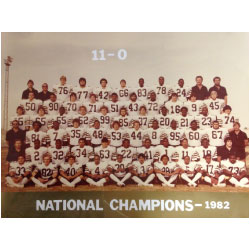 The 1982 National Championship team from Taft College was a team to be reckoned with. Players from all across the United States (Texas, Ohio, North Carolina, Arkansas, Hawaii, and Kentucky) converged in Taft for the opportunity to play for Head Coach Al Baldock and to be a part of the Taft College football program. This team’s 1982 season record displays consistent, overwhelming victories against a string of opponents—including Santa Monica College, College of the Sequoias, and Bakersfield College. These wins were bolstered by the fact that Taft College shouldn’t have been playing in the Metropolitan Conference (one of the most renowned community college leagues in California).

At a population of 1,200 full-time and part-time students, Taft College’s football team belonged in a much smaller conference. However, with their first victory against the El Toro Marines (with a final score of 44 to 0), the Taft College football team proved that they belonged in the Metro Conference just the same as any other team.