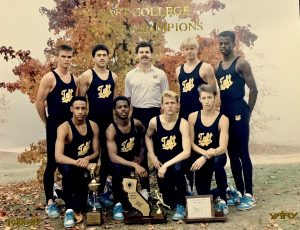 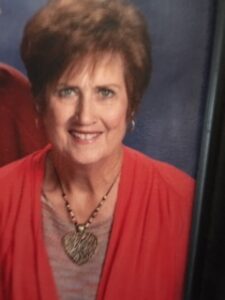 Carolyn Hosking was born on a farm in Oklahoma, the youngest of five. After her junior year of high school, Carolyn married Harold Roberts who was stationed at Fort Sill and moved to Taft.

She attended Adult School at Taft College and received her high school diploma. In 1971, she began attending Taft College and graduated in 1973 with honors. For the following three summers, she attended Pomona College in Claremont to complete a comprehensive management course. She also attended a Financial Certification course at the University of Colorado in Boulder.

Working with four Taft College Presidents, Carolyn served on the Taft College Board of Trustees for 25 years, including eight years as Board President. She successfully executed the multiple promotional efforts to pass the Measure A bond.

Carolyn is now married to Harry Hosking, a long-time resident of this community. She is a person of strong faith and very active in the First Baptist Church.

Craig worked with Math/Science faculty to implement a $10 Million Science, Technology, Engineering, and Mathematics Grant, the largest U.S. STEM Grant awarded at that time. Over his tenure, Craig served as Chair of Partnership for Excellence, Block Grant, and Budget Advisory Committee. For 35 years, he was a member of the Faculty Bargaining Team that worked closely with TC Administration to implement interest-based bargaining at Taft College. 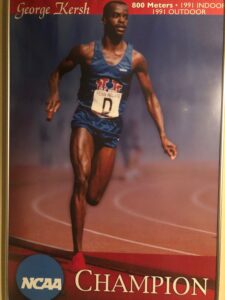 In high school, George Kersh was a three-time Mississippi State Track Champion in the 400 and 800 meters and two-time Cross Country State Champion. George broke National High School Records for indoor and outdoor 800 meters (1:46.58). He was named Track and Field News and Gatorade High School Track Athlete of the Year. He traveled to Athens for the Jr. World Championships and New York where he won the Millrose Games Jumbo Elliott Mile.

At Taft College, George was a two-time Conference Cross Country Champion, NorCal Cross Country Champion, and member of the Taft College 1988 State Championship Cross Country Team. He was a four-time State Track Champion in the 800m, 1500m (twice), and 4x400m relay. In 1988, he set National Community College Records in the 800m indoors (1:48.50) and outdoors (1:45.35) at the U.S. Olympic Trials. At the Mt. SAC Relays in 1989, George and his Taft College relay team defeated a favored Florida Gator team with two Olympians to set a National Community College Record in the sprint medley relay (3:14.44). George also ran internationally as a member of the renowned Santa Monica Track Club with Carl Lewis and Johnnie Gray.

After transferring to the University of Mississippi, George was a two time NCAA 800m Champion (Indoor and Outdoor). He broke the Goodwill Games 800m record representing the U.S. in 1990. 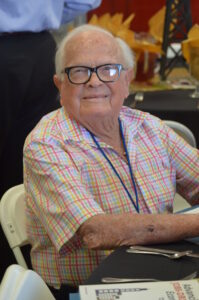 Harry Dale Wilson was born on December 13, 1921 to Bob and Beulah Wilson. He graduated from Taft Union High School in 1939 and Taft College in 1942.

After graduation, Harry went to work for Standard Oil in Coalinga, California. Harry entered the Army at 25 years old and was stationed at Camp Roberts in California, Fort Knox in Kentucky, and Fort Meade in Maryland. After his honorable discharge, he was recalled to service due to the Korean War. Although he was offered the position of Officer, he declined because of his age.

In 1955, Harry moved to Los Angeles and began his long career with Richfield Oil Corporation (renamed Atlantic Richfield Company (ARCO) after the merger with Atlantic Refining Company) where he worked until his retirement in 1984. After he retired, Harry returned to Taft to care for his elderly parents. During this time, he also enjoyed traveling and spending time with his aunt and uncle, Opal and Bill Smith.

Over the next 30 years, Harry continued to support and give back to the City of Taft. He participated in the children’s reading program at the Kern County Library, volunteered countless hours at the West Kern Oil Museum and the NEEDS Center, and proudly served as a Board Member of the Taft College Foundation. In 2013, Harry traveled to Washington D.C. on the Honor Flight for World War II Veterans.

Harry always felt privileged to have had the opportunity to attend and graduate from Taft College. On October 29, 2013, Harry presented the college with a $104,000 check to commemorate his aunt Opal Smith’s 104th birthday. Since this initial donation, he funded four additional Taft College scholarships. 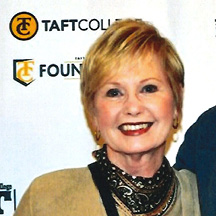 In 1995, Shelley Klein began her 21-year Taft College tenure as Executive Assistant to the Superintendent/President and later served as Secretary to the Board of Trustees and Secretary of the Taft College Foundation. At that time, there were just eight management employees and 16 full-time faculty members. As Taft College did not have a Human Resources department, Shelley functioned as the sole Human Resources representative. She was consistently submitted the most thorough and accurate work product.

Shelley served on Shared Governance Committees, including roles as recording secretary of both bargaining units, recorder for presidential cabinet meetings, and member of the reclassification committee. She also took on special projects, including organizing Taft College’s Board Policies and Administrative Procedures, developing a new Taft College logo and brand identity, and conducting all presidential searches.

Her solid expertise on the Brown Act and extensive corporate experience were boons in corporate compliance to the Office of the President, Board of Trustees, and Taft College Foundation. In 2002, as corporate secretary, Shelley was fundamental in creating the Taft College Foundation as a 501(c)3 non-profit corporation. In the early days of the Foundation, Shelley was responsible for fundraising events. In addition, Shelley led all WKCCD celebrations and events arising from the Office of the President. She initiated the annual End-of-Year Dinner to celebrate that year’s accomplishments and honor retirees.

In 2004, the WKCCD voters approved the Measure A Facilities Bond. All on her own time, Shelley organized critical phonebanks and other promotional campaign tactics to facilitate passage of Measure A.

Shelley served seven different Taft College Presidents. She ensured seamless transitions of leadership by keeping the Office of the President and Board of Trustees always functioning at their highest levels. 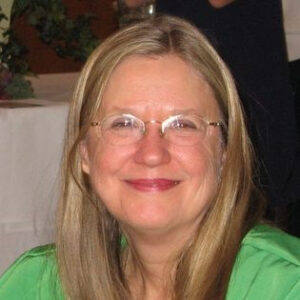 In 1989, Sonja Swenson was hired as an Art and Humanities Instructor/Professor at Taft College. For many years, she served as Division Chairperson for the Liberal Arts, Arts and Humanities Division, as well as Art Gallery Coordinator. Sonja is responsible for many artworks on campus. Sonja also started an annual Student Art Show in Spring 1990.

In 1991, Sonja worked on “The Umbrellas,” a project by Christo and Jean-Claude. Sonja developed a class that allowed her students to work on the project located at Tejon Ranch.

In 1994, Sonja served on the Board of the Arts Council of Kern representing western Kern County. There were a few small galleries in Bakersfield, so Sonja thought Taft should have an art gallery. She wrote a grant proposal to re-model a space on campus for an art gallery. The grant funding came through, but the space on campus was not made available. Sonja found an off-campus location on Center Street. The first exhibit was called, “Taft Collects,” and showcased works from private collections in Taft. The gallery exhibited photos of “The Umbrellas” taken by Sonja’s students. Exhibits included works by local artists and Sonja’s photographs of Christo’s Wrapped Reichstag Project in Berlin, Germany and The Gates Project in Central Park in New York City. The Center Street gallery eventually moved onto the Taft College campus.

Although she retired in 2015, Sonja Swenson still teaches at Taft College as an Adjunct Instructor in the Arts Department.