February 27, 2017 In Uncategorized By ayaladenae 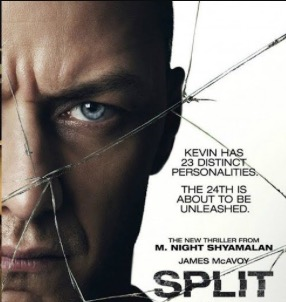 “Split” is not your ordinary scary movie. There isn’t much blood or glory; instead, you find yourself scratching your head. It definitely gets you thinking about the supernatural world.
The movie mainly focuses on this mysterious man Kevin that is diagnosed with not one, not two, but 23 distinctive personalities.

Throughout the movie Kevin (James McAvoy) frequently visits with his psychiatrist Dr. Karen Fletcher (Betty Buckley) for checkups on his status with controlling his disorder.
The disorder Kevin is dealing with is called Dissociative Identity Disorder (DID).

As Kevin jumps from different personalities, it is up to the three girls he kidnapped to figure out who they are dealing with. Will it be Dennis? The one who kidnapped them. Will it be Patricia? The lady who is constantly reminding Kevin what to do. Will it be Hedwig? The 9 year old boy who occasionally tells the girls too much information. Or will it be Barry? The calm, collective fashion designer.

Their escape from Hell starts to seem impossible as they later find out they are dealing with something much bigger than the 23 personalities.

Kevin describes this personality as the “Beast”. Who has unnatural superpowers.